Kim Gray
Feeling fabulous over 45. The world has never been a bigger, better place!


The Goblet: Table of Contents

Thanks to my son's grade six teacher and her creative ways of teaching Native Studies, I'm now including bannock on our most basic list of recipes for getting started. 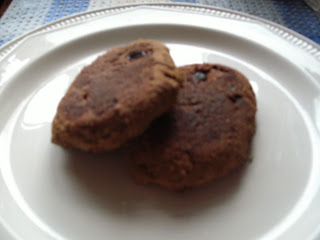 This recipe is not SCD friendly but the egg can be substituted or omitted as can just about everything else except the flour.  Since it's very much like the yeast free, sugar free, flatbreads I've been making for years, of course I had to add it to our list of basics.

I've read that bannock is the native bread of the North American continent.  I have a little trouble with believing it entirely just because I've also read that wheat was not a part of the Native diet until Europeans introduced it.

The fact that celiac disease was considered a Caucasian disease until the intake of of wheat increased enough in native and Asian cultures (a fairly recent occurrence) makes me believe that indeed, native culture did not include wheat in their diet.

So I started looking around and this man agrees with me.  It was Europeans who introduced bannock to the North American native population. He believes it to have originated in Scotland.

Most gluten free breads are more like muffin mixes.  This one, however, you actually can shape into a snake and then roll onto a stick and cook over a fire... just the way it used to be done originally.   We used amaranth for the flour in our first try and it turned out beautifully.  Then we added raisins to the second half of our recipe and that was equally wonderful but in a different way.

2 1/2 cups flour (We used amaranth and it was wonderful!)
5 tbspn baking powder (We used 3 tbspn baking soda; 2 tbspn cream of tartar.)
1/2 tsp salt
3 tbspn sugar (optional)
3 tbpn lard (see lard recipe for chemical free lard)
1 egg (many recipes I found around the internet do not list any egg at all)
1 cup water (Really, just enough water to make a dough that can still be molded into rough shapes.)

Mix the dry ingredients well.
Put in the lard and use fingers and thumbs to mix it in as one does with pastry dough.
Mix egg and water (if using an egg).
Add wet mix to dry mix and combine it all roughly and quickly.

This is a great recipe to do with kids because you actually don't want to over mix it or it will turn out tougher than it needs to be.  Of course a gluten grain is more at risk than a non gluten grain.  Nevertheless, this is not a super picky kind of recipe, so relax and don't worry.  As long as you don't end up with lumps of salt or baking soda (which you shouldn't since your dry mix were well combined), you'll be fine.

Heat a skillet (I love my cast iron skillet) to about medium.  Or if you're like me, impatient, turn it on high and later turn it down, risking the possibility of burning your bannock.  Paint the skillet with thin coat of lard, dust with flour.  It always surprises me as to how nicely this stops breads from sticking.  Pat out your bannock into a couple of giant disks, or several smaller disks and place them in the skillet to cook until browned on the bottom.  Flip and cook until browned on the top side. 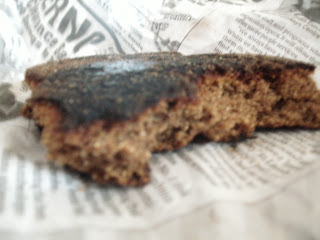 If you want to pack it warm for lunch, don't put it in plastic or the condensation will kill it and you may risk developing a new mould that might not be so nice to ingest.  Instead, wrap it in newspaper and then tie it with jute or throw an elastic around it.  It will keep all day just beautifully.  In fact, I send a large disk with my son to school and the portion that he brought home, still wrapped in the newspaper, made a wonderful after school snack dipped in honey.

If it goes stale, blend it up and use it as breadcrumbs for a fish fry or part of your next batch of gluten free granola mix.